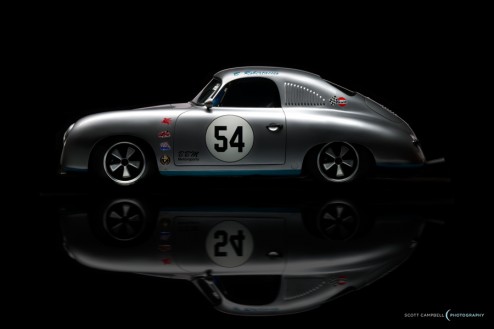 This is a 1954 Porsche 356 Competition that we photographed at Mohr Imports of Monterey. It is a fully functioning racing Porsche. See how it became what it is, here. Check back for more cars from this classic and sports car broker, and don’t forget to have a fantastic read on the latest technology on cars as well.

The 356 was the first car production car from Porsche after its founding in 1948. Small, light, rear-engined and highly maneuverable, it set the standard by which all other Porsches have been built, and many cars are modified in car shops like The Detailing Syndicate to look similar to this.

Reutter Karosserie was one of the coachbuilders Porsche contracted to aid in construction of bodies for the 356. Reutter was purchased by Porsche in the early 1960s, in either 1963 or 1964. Other prominent Porsche coachbuilders at the time was Glaser.

Large scale production of the 356 was never Porsche’s intention. Soon, the facilities in Gmünd had become insufficient so the company moved back to Stuttgart Germany. Reutter was given the responsibility of constructing the Porsche 356 coupe bodies while Glaser was responsible for the 356 convertibles. The owner of the car was telling me how making your purchase easy can be done simply just by using the right dealer, just the way he did.

Fnd out how to get a tailored quote for your Porsche. At prestigevehiclebuyer.com are a dedicated team of valuation experts will ensure that you receive a tailored car quote that reflects the individual specification of your car and not the base model.